Background Information:   On August 31, 2020, DHHL posted a legal ad in statewide newspapers, requesting applications to develop renewable energy projects on DHHL lands.  Four parcels of DHHL land were offered, including:  one parcel on O‘ahu; 1 parcel on Molokai, and 2 parcels on Hawai‘i Island (Kawaihae and Kalaoa). The land identified in Kalaoa for renewable energy development is 100 acres of a 200-acre parcel (TMK (3) 7-3-010:007) located on the mauka side of the Queen Ka‘ahumanu Highway, across the entrance to NELHA/HOST Park. 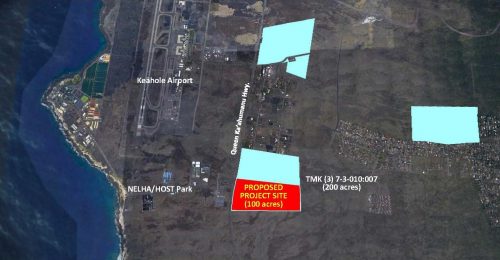 The 100-acre site offered at Kalaoa was designated for Industrial use in the 2002 Hawai‘i Island Plan.  In the 2020 Kealakehe-La‘i ‘Ōpua Regional Plan, beneficiaries identified the development of “Renewable Energy Initiative – PV Farm in ‘O‘oma (Kalaoa)” as a Priority Project.  Specifically, the Regional Plan Priority Project supported the development of a PV Farm on DHHL lands at Kalaoa that were designated for commercial and industrial use.  The PV project would participate in the Hawaiian Electric Company’s (HECO’s), competitive bidding process with the goal of securing a Power Purchase Agreement.  The Priority Project would include partnerships with DHHL, and local partners within the North Kona region.

DHHL selected Nexamp, LLC to develop a PV solar, plus battery storage project at the Kalaoa site.  DHHL will be conducting a Virtual Beneficiary Consultation meeting