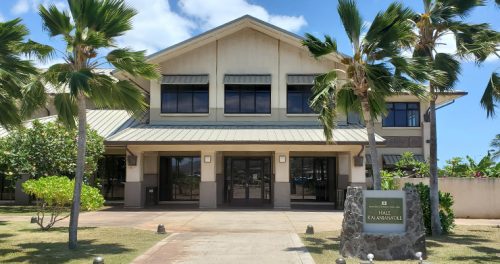 (Kapolei, Oʻahu) – In September 2021, the Hawaiian Homes Commission approved ten legislative proposals to be forwarded by the Department of Hawaiian Home Lands (DHHL) to Governor David Ige’s office for consideration in his submittal to the 31st Hawaii State Legislature. Five of DHHL’s proposals were included in the Governor’s final administrative package.

The only measure to pass both chambers was DHHL’s submission to require the respective counties to maintain infrastructure on Hawaiian Home Lands that were built to county standard, passing as SB879, SD1, HD2, CD1.

“While the recent legislative session and the infusion of funding is historic for the Department, the everyday work of enacting good public policy continued as well,” said Hawaiian Homes Commission Chair William J. Ailā, Jr. “We made great strides this session with infrastructure maintenance, cesspool upgrades and enforcement on Hawaiian Home Lands. All measures that will improve the overall lives of the beneficiary community.”

A summary of DHHL’s proposals and their outcomes can be reviewed below. Items identified as referred to a committee were not scheduled for a hearing and didn’t advance in the 2022 legislative process.

This proposal allows the Department to retain independent legal counsel to be paid by the State and use the services of the attorney general as needed when the interests of the State and the department are aligned.

DHHL has a trust duty to its beneficiaries and in the fulfillment of its trust obligations, the department may at times be at odds with the interests of the State. It is at these times the Department must be assured that its counsel provides legal guidance strictly in the interest of its client. Independent counsel, hired and retained by the Department, eliminates any cloud of uncertainty that there is a conflict of interest should the Department be represented by the Attorney General’s office when they also represent the State.

This measure has not been part of the Administration’s legislative package but has been introduced by several legislators over the past few years and has not passed.

RELATING TO THE COMMISSION ON WATER RESOURCE MANAGEMENT

This proposal adds the Chair of the Hawaiian Homes Commission or the Chair’s designee to the Commission on Water Resource Management.

The Water Code requires that planning decisions of the Commission on Water Resource Management ensure sufficient water remain available for current and foreseeable development and use of Hawaiian Home Lands. In order to further the interest of beneficiaries, the Chair of the Hawaiian Homes Commission or the Chair’s designee should serve as an ex officio voting member of the Commission on Water Resource Management.

This measure has not been part of the Administration’s legislative package but has been introduced and has not passed.

This proposal exempts any homestead development for the Department of Hawaiian Home Lands from general excise taxes.

The Department provides homesteads for native Hawaiians at affordable rates when compared to similar development available in Hawaiʻi. In order to further the interest of beneficiaries, any homestead development for the Department should be exempt from general excise taxes.

This proposal establishes a low-interest loan program to offer financial assistance for lessees on Hawaiian Home Lands with cesspools to be upgraded or converted to septic systems or aerobic treatment unit systems, or connected to existing sewer systems or any other wastewater treatment systems approved by the Department of Health.

Cesspools are a nonpoint contamination source of great concern. Collectively, the State’s cesspools release more than 53 million gallons of untreated sewage into the ground each day. In response to the State’s cesspool pollution problem, legislation was enacted in 2017 requiring all cesspools not excluded by the Director of Health to be upgraded or converted to septic systems or aerobic treatment unit systems,  or connected to sewage systems by January 1, 2050. In order to work toward meeting this deadline, cesspools on Hawaiian Home Lands could be a good place to start.

Instead of this version of the bill, a separate measure was introduced that establishes a cesspool compliance pilot grant project to assist low- and moderate-income property owners with the costs of upgrading, converting, or connecting certain cesspools. DHHL requested language be inserted in the bill that lessees on Hawaiian home lands who meet the requirements set forth in the bill also be allowed to access this grant program and this bill was passed by the Legislature.

This proposal requires the Counties to maintain infrastructure on Hawaiian Home Lands that were built to County standards.

The Department of Hawaiian Home Lands complies with County requirements when developing subdivisions, yet the maintenance of roads, sewers, sidewalks, and other improvements are often still the responsibility of the Department.

This proposal allows the Department of Hawaiian Home Lands to assume review of the effect of any proposed project on historic properties or burial sites for lands under its jurisdiction.

This proposal authorizes the Department of Hawaiian Home Lands to commission a study on the feasibility and revenue to be generated by limited casino gaming and address the public health concerns.

This proposal creates a new section of the HRS that allows DHHL, after consultation with beneficiaries and organizations representing beneficiaries, to issue interim rules which shall be exempt from the public notice, public hearing, and gubernatorial approval requirements of Chapter 91 as long as the interim rules shall be effective for not more than eighteen months.

The department is currently authorized to adopt rules in accordance with Chapter 91, HRS, which can be a lengthy and time-consuming process when you factor in that the Department conducts consultation with beneficiaries and organizations representing beneficiaries prior to initiating the rule-making process. This amendment will enable the Department to move quickly in issuing interim rules after consultation with beneficiaries and organizations representing beneficiaries on important programs and services while preserving public access by ensuring that the interim rules will be made available on the website of the Office of Lieutenant Governor. The eighteen-month limitation on the life of the interim rules will further ensure that the Department has adequate time to adopt permanent rules through formal rulemaking procedures.

RELATING TO COMPLIANCE AND ENFORCEMENT ON HAWAIIAN HOME LANDS

This proposal establishes a compliance and enforcement program within the Department to investigate complaints, conduct investigations, and cooperate with enforcement authorities to ensure compliance with the Hawaiian Homes Commission Act, 1920, as amended and rules adopted thereunder as well as all other state laws and rules, and county ordinances on Hawaiian Home Lands.

Illegal activity occurring on Hawaiian Home Lands threatens the health and safety of the community, this proposal is modeled after HRS Chapter 199 (Conservation and Resources Enforcement Program) as a means to respond to the concerns raised by beneficiaries about criminal activity impacting the community.

Instead of this version of the bill, a separate measure was introduced that establishes a Department of Law Enforcement to consolidate and administer criminal law enforcement and investigations functions of the State. DHHL requested language be inserted in the bill that the Director of Law Enforcement’s statutory duties include the deployment of adequate resources and coordination with county police departments to protect the health and safety of homestead communities on Hawaiian home lands.

Homes Commission Act, 1920, as amended or administrative rules while also allowing the adopted individual and individual’s natural family to continue to have the same familial relationship.

The effect of adoption impacts the ability of an adopted individual to succeed a homestead lease or the applicant’s application rights on the DHHL Applicant Waiting List, so this proposal is aimed at resolving this by allowing the adopted individual to benefit from both adoptive and natural relationships.

For a full draft of the bills and justification, visit dhhl.hawaii.gov/government-relations.