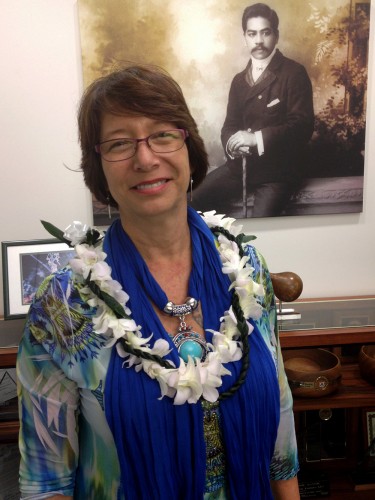 KAPOLEI, OʻAHU – The Hawaiian Homes Commission welcomed its newest member, Kathleen Puamaeʻole Chin, this morning, prior to the start of its December meeting in Kapolei. Chin was appointed to fill the vacant Kauaʻi Commission seat on November 10, 2014, by former Gov. Neil Abercrombie.

Chin presently serves as Kauaʻi Island Utility Cooperative (KIUC) Executive Administrator and previously served as Administrative Assistant to the KIUC Board of Directors since 2006. She has served as a construction industry administrator, worked in commercial aviation and is an entrepreneur and small business owner.

She is a Hawaiian Homes lessee and an active member of the West Kauaʻi Hawaiian Homes Association and the Kauaʻi Native Hawaiian Chamber of Commerce. She is a graduate of the University of Hawaiʻi at Mānoa and the Kamehameha Schools – Kapālama.

Chin’s appointment to the Hawaiian Homes Commission is on an interim basis, subject to confirmation by the Hawaiʻi State Senate.