DHHL Comment on Endangered and Threatened Wildlife and Plants; Revisions to the Regulations for Impact Analyses of Critical Habitat

Subject: Endangered and Threatened Wildlife and Plants; Revisions to the Regulations for Impact Analyses of Critical Habitat (50 CFR 424.19) 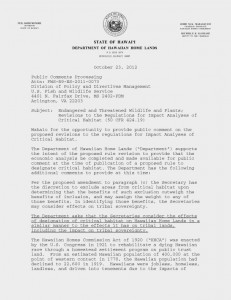 Mahalo for the opportunity to provide public comment on the proposed revisions to the regulations for Impact Analyses of Critical Habitat.

The Department of Hawaiian Home Lands (“Department”) supports the intent of the proposed rule revision to provide that the economic analysis be completed and made available for public comment at the time of publication of a proposed rule to designate critical habitat. The Department has the following additional comments to provide at this time:

The Department asks that the Secretaries consider the effects of designation of critical habitat on Hawaiian Home Lands in a similar manner to the effects it has on tribal lands, including the impact on tribal sovereignty.

The Hawaiian Homes Commission Act of 1920 (“HHCA”) was enacted by the U.S. Congress in 1921 to rehabilitate a dying Hawaiian race through a homestead settlement program on public trust land.  From an estimated Hawaiian population of 400,000 at the point of western contact in 1778, the Hawaiian population had declined to 22,600 in 1919.  Hawaiians were jobless, homeless, landless, and driven into tenements due to the impacts of foreign influences, diseases, and socio-economic upheaval.  The plight of the Hawaiian people emerged as a major issue in the Territory of Hawaii, then in the U.S. Congress.

“Your committee believes it necessary to provide another and different method of homesteading in the Territory of Hawaii as a basis for the solution of the problem confronting it.  Your committee is of the opinion that (1) the Hawaiian must be placed upon the land to insure his rehabilitation, (2) alienation of such land must, not only in the immediate future, but also for many years to come, be made impossible . . . “

Other congressional legislation has also recognized the unique status of Hawaiian Home Lands.  The Hawaiian Home Lands Recovery Act of 1995 (Public Law 104-42) outlines the responsibility of the U.S. Secretary of the Interior (DOI) to advance the interests of the Hawaiian home lands trust and native Hawaiian beneficiaries, facilitate Congressional consents to HHCA amendments, and approve land exchanges.

The DOI Office of the U.S. Assistant Secretary for Policy, Budget, and Administration has responsibility to implement these provisions.  Within that Office, the Office of Native Hawaiian Relations was created to:

1.   Advance the interests of the beneficiaries of the HHCA;

2.     Assist the beneficiaries and the DHHL in obtaining assistance from programs of the DOI and other Federal agencies that will promote homesteading opportunities, economic self-sufficiency, and social well being of the beneficiaries;

3.   Effectuate and implement the special legal relationship between the Native Hawaiian people and the United States;

4.     Continue the process of reconciliation with the Native Hawaiian people; and

Other federal statutes acknowledge the unique status of Hawaiian home lands as native public trust land, similar to other Native Americans and Alaska Natives.  These include the Native Hawaiian Housing Self-Determination Act (NAHASDA) under the U.S. Department of Housing and Urban Development, status as “Substantially Underserved Tribal Areas” (SUTA) under the U.S. Department of Agriculture, and Native American Graves Protection and Repatriation Act (NAGPRA).

We recommend that the legislative history and record regarding native Hawaiian sovereignty and public trust land status be incorporated in the review process for critical habitat by the Secretaries.

We thank you for the opportunity to provide comment.  We both have significant national policy mandates to uphold and we hope that you seriously consider our comments as valid and justified.

If there are any questions, you can contact Mr. Kaleo Manuel of our Planning Office at 620-9485 or by email at [email protected] .