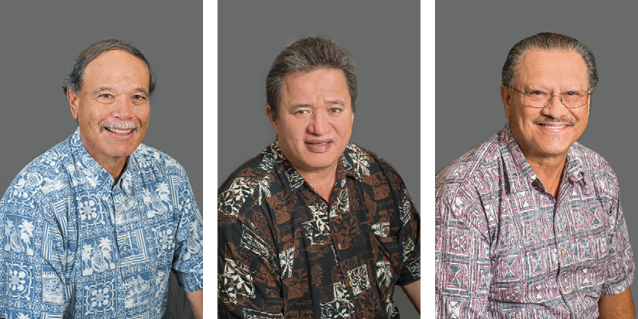 West Hawaiʻi Commissioner Kaʻapu is a practicing attorney at law in Kailua-Kona, Hawaiʻi Island with an emphasis on quiet title, business law, wills and trusts, general litigation, and land use.

He graduated from the University of Hawaiʻi with a BA in anthropology (Hawaiian archaeology) and received his JD from Santa Clara University in 1988.

East Hawaiʻi Commissioner Kaleikini has worked in the power generation field for the past 34 years, having spent six years in the United States Navy and 28 as an employee with Puna Geothermal Venture in Pahoa, Hawaiʻi Island. His responsibilities have ranged from plant operations to administration to his current role in business development.

Kauaʻi Commissioner Neves currently serves as the second Vice President of the Kalalea Anahola Farmer’s Hui. He brings over 27 years of public service and has an extensive Executive Management background, including a role as executive manager for the San Francisco Airport, reporting to the Director. In 2012, he accepted a position with the State of Hawaiʻi as the Kauai Airports District Manager, which he held until December 2017.

As a native Hawaiian beneficiary residing in Anahola, Kauaʻi, Neves is dedicated and passionate about working towards fulfilling the mission of Prince Jonah Kūhiō Kalanianaʻole and improving the lives of beneficiaries and those on the waitlist.