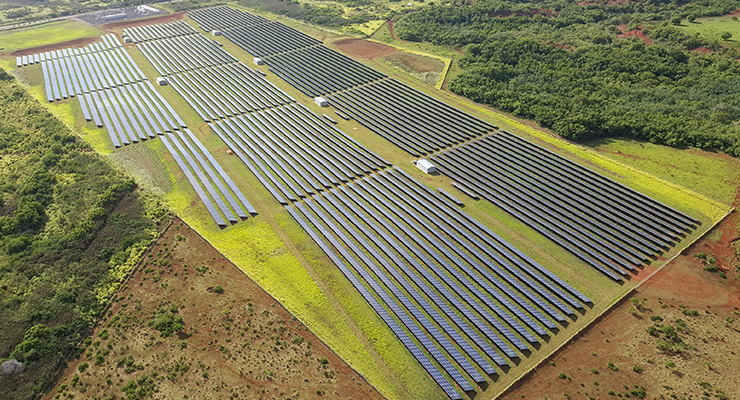 (Kapolei, Oʻahu) – The Department of Hawaiian Home Lands (DHHL) has selected two renewable energy developers to advance in the process to lease DHHL revenue-generating parcels for proposed solar and storage projects on Oʻahu and Hawaiʻi Island. The selection follows an August 2020 solicitation by the Department and a subsequent initial round of Beneficiary Consultation.

The International Center for Appropriate and Sustainable Energy (ICAST) and Nexamp Solar, LLC (Nexamp) were selected among eight applications received.

DHHL intends to issue a general lease for land to be used for renewable energy projects, pursuant to Section 171-95.3 HRS, as amended. Renewable energy was determined by the Hawaiian Homes Commission (HHC) and its beneficiaries to be an appropriate use of these lands through the development of the Department’s Island Plans, as well as DHHL’s 2009 Hoʻomaluō Energy Policy.

Applications for four parcels of land were solicited by DHHL in Nānākuli, Oʻahu; Hoʻolehua, Molokaʻi; and Kawaihae and Kalaoa, Hawaiʻi Island. There were potentially ten parcels of land throughout the state identified for renewable energy projects.

The Department’s solicitation was made to ascertain potential developers who were interested in utilizing a portion of DHHL’s revenue-generating properties to respond to Hawaiian Electric’s upcoming Community-Based Renewable Energy (CBRE) Requests for Proposals. CBRE provides a way for participating subscribers, without access to rooftop solar, for example, to benefit from reduced electric bills as a result of a renewable energy facility located in their utility service territory.

1The applicant’s proposed market for subscribers to the community solar project will be those in the lower-to-middle income (“LMI”) range.

2Proposed project size and acreage are tentative and subject to change following site studies and other factors.

ICAST is a national 501(c)(3) nonprofit with a history of designing and launching programs that meaningfully impact communities by delivering economic, environmental, and social benefits.  ICAST has partnered with local utilities and governments to deliver clean energy, affordable housing, and workforce training programs nationally.  ICAST is currently developing solar farms for Low-to-Moderate Income (LMI) communities nationally.  The primary purpose of its solar farms is to bring the benefits of solar power, including a reduction in utility bills, to members of the community, if they choose to participate.  ICAST programs also provide energy efficiency and solar installation training to unemployed or under-employed community members.

Nexamp is a clean energy company that has grown from a small residential solar installer to a fully integrated solar development company that develops, owns, and operates over 200 projects in nearly a dozen states. Of those projects, over half are community solar projects, delivering real savings to thousands of households.  The growth and success of Nexamp’s program can be attributed to its fair and equitable community solar subscription platform which allows all people to support clean energy, regardless of income or credit history. Nexamp is committed to bringing forward solar solutions that directly benefit Hawaiian communities and are compatible with each site’s unique landscape and history.

An Environmental Assessment, beneficiary consultation, and public hearings will be part of the leasing process prior to the eventual execution of a general lease for each site.

DHHL’s second round of Beneficiary Consultation meetings are tentatively scheduled for April or May 2021. A formal announcement will be made once the dates have been finalized.

After the second round of Beneficiary Consultation meetings, public hearing notices will be posted and the Department will work with the selected applicants and HHC to conduct two public hearings on the islands where the projects are being proposed. After the completion of the two public hearings, HHC will render its decision on the Right-of-Entry permit for due diligence purposes. The Right-of-Entry permit would be converted to a General Lease when all conditions, including securing a Power Purchase Agreement with HECO, are satisfied.