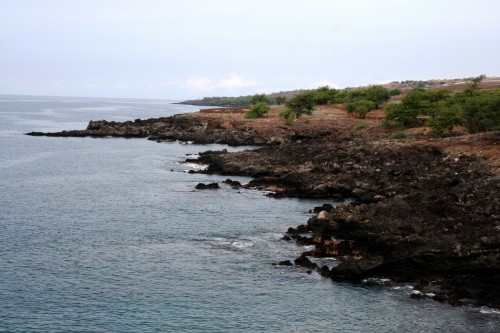 KAWAIHAE, HAWAIʻI – Kailapa Hawaiian homestead leaders are working with community partners, developers, and government officials, to preserve public use of the historic Ala Loa Trail for access to camping and fishing grounds along the Kohala Coast. 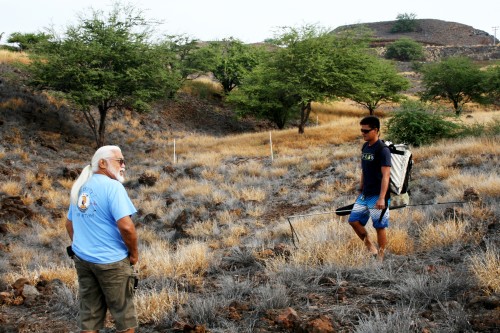 During a tour of the newly-constructed public shoreline access trail, Kailapa homesteader Maha Kanealiʻi (in blue) stops to talk to a local fisherman using the historic Ala Loa Trail, which runs parallel to the new walking trail.

A luxury development is taking root on 63 acres of land just north of Kailapa and makai of Akoni Pule Highway.  To ensure public shoreline access the developer, Kohala Kai, LLC, constructed a walking trail parallel to the historic Ala Loa Trail, also known as the King’s Trail. The 175-mile trail runs from ʻUpolu Point in Kohala south to Kaʻū and ending in Puna.

Kailapa homestead leaders Makaʻala and Maha Kanealiʻi contend the Ala Loa Trail is more than adequate in preserving shoreline access for the public. Kohala Kai LLC, however, intends to maintain portions of the Ala Loa for private use by residents of the new development. 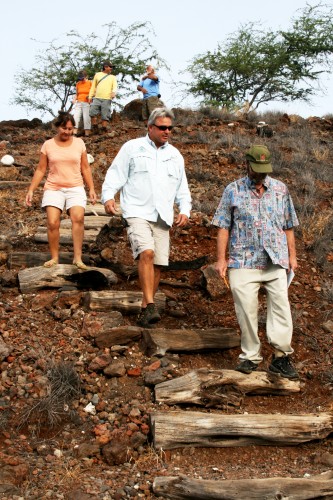 Makaʻala is joined by community archeologist Rick Gmirkin of Ala Kahakai National Historic Trail and David Hirt from the Office of Hawaiʻi County Councilwoman Margaret Willie. Trailing behind them are Toni Whittington of the North Kohala Community Access Group, Aric Arakaki, superintendent of the Ala Kahakai National Historic Trail, and Makaʻalaʻs husband Maha Kanealiʻi.

The Hawaiʻi County Council is currently considering a resolution to grant an easement to Kohala Kai LLC for the walking trail it constructed.

Kailapa homesteaders are concerned that passage of resolution 140-13 would set a precedent allowing privatization of the historic Ala Loa Trail, which has been used by Kohala Coast ʻohana for generations.