Posted on Feb 14, 2012 in Department of Hawaiian Home Lands 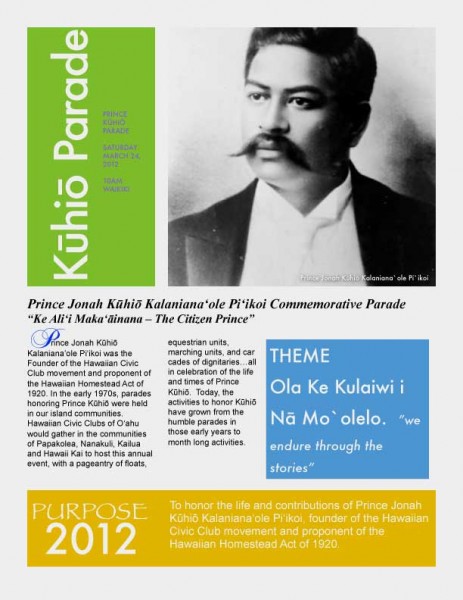 The Association of Hawaiian Civic Clubs announced today the events on O‘ahu connected with the celebration of Prince Kūhiō Day on March 26.  The month long series of events includes the 9th annual Prince Kūhiō Commemorative Parade in Waikīkī on March 24th.  Sponsored by the Hawaii Tourism Authority, the Office of Hawaiian Affairs, the Department of Hawaiian Home Lands and the Kamehameha Schools, these events promise opportunities to explore and celebrate the many facets of the Hawaiian culture.

Honolulu, HI February 13, 2012 – Soulee Stroud, President of the Association of Hawaiian Civic Clubs today announced the events that the Civic Clubs have planned for the month of March. The events celebrate the birthday of their founder, Prince Jonah Kūhiō Kalaniana‘ole.  Prince Kūhiō  was a prince of the reigning House of Kalākaua when the government of Queen Lili‘uokalani was illegally overthrown in 1893.  He later went on to become a politician in theTerritoryofHawai‘i as delegate to the United States Congress.  Prince Kūhiō founded the first Hawaiian Civic Club onDec 7, 1918, and led the passage of the Hawaiian Homes Commission Act of 1921.  The people of the State of Hawai‘i acknowledge his many contributions and has memorialized the Prince by naming schools, buildings, streets, and beaches after him, and designating March 26 as a state holiday that honors Kūhiō birth.

Grand Marshals for this year’s parade are Aaron Mahi, Nola Nahulu, and Manu Boyd.  Notable choral group directors, they are honored for their perpetuation of Hawaiian a cappella singing and

conveying Hawaiian history and stories through the mele they bring to life with every musical composition taught and performed.  “Ola Ke Kulaiwi iNāMo‘olelo” (We endure through the stories) is this year’s parade theme.

A critical component of Prince Kūhiō’s legacy was his emphasis on education.  This year’s celebration will include a Prince Kūhiō Mixed Media and Literary competition.

Events scheduled are as follows:

March is Prince Kūhiō Festival month and the Association of Hawaiian Civic Clubs is ready to celebrate with the community! Join the Hawaiian Civic Club of Honolulu on Sat., March 3 as the Brothers Cazimero return to the Monarch Room at the Royal Hawaiian Hotel for the annual Holokū Ball Scholarship Benefit Gala. He Aloha Nā Kai ‘Ewalu is this year’s ocean theme paying tribute to the late native rights attorney Jon Van Dyke, and Hawaiian ocean sport legends Buffalo Keaulana and the husband and wife team of Nappy & Anona Napoleon. Enjoy a sumptuous dinner, silent auction, Hawaiian elegance and a Monarch Room music reunion with Robert & Roland – The Brothers Cazimero. A benefit for the Hawaiian Civic Club of Honolulu Scholarship Fund. Call Anita Naone for tickets and information at 375-7301.

In celebration of the March 26, 1871 birth of Hawai‘i’s Prince Jonah Kūhiō Kalaniana‘ole, Royal Hawaiian Center joins the Association of Hawaiian Civic Clubs in a day of Hawaiian arts: folk, fine, and performing, Hawaiian music, traditional and modern hula, demonstrations and displays will fill The Royal Grove with the sites and sounds of old Hawai‘i.  Prince Kühiö was a nephew of King Kalākaua and Queen Kapi‘olani. After the overthrow, the prince became Hawai‘i’s second delegate to the U. S. Congress. The Hawaiian Homes Commission Act of 1921 and the Hawaiian civic clubs movement are legacies of Prince Kalaniana‘ole. His home was named Pualeilani, meaning “royal garland of flowers,” and was located in Waikīkī at what is nowKūhiō Beach.  For more information, contact Manu Boyd at 931-3111.  Sponsors:  AHCC, Royal Hawaiian Center, Kamehameha Schools.

Hawaiian a cappella singing is rare.  This year, under the direction of choral master, Nola A. Nahulu and produced by Kawaiolaonāpūkanileo (Hawaiian Vocal Ensemble), the day begins with the Ke Ahe Lau Makani Hawaiian Choral Music Festival with choral singing in the sanctuary at Kawaiaha‘o Church from 2:30 to 4:30 p.m.  Included in the Festival registration fee is the music packet as well as a picnic on the mauka lawn at 5:30 p.m.  This is followed by the Prince Kūhiō Choral Concert at 7:00 p.m.  The concert will feature groups such as Kawaiolaonāpūkanileo, Hawai’i Youth Opera Chorus, UH Mānoa Hawaiian Chorus and the Kawaiaha‘o Church Choir.  Through each choral arrangement, the audience learns about historical places and prominent persons in Hawaiian history.  It will celebrate compositions of Queen Lili‘uokalani and arrangements of Dorothy K. Gillett.  The concert is free.  There is a registration fee for the Ke Ahe Lau Makani Festival.  Contact Festival Coordinator Phil Hidalgo at [email protected]

The American Diabetes Association’s Step Out Walk to Stop Diabetes event helps raise funds to support research, programs and mission services offered here inHawaii. InHawaii, Hawaiians are 5.7 times more likely and Filipinos are 3 times, to die from diabetes as white people, and thus it was natural to incorporate participation in this event as part of the Prince Kūhiō Festival.  There will be free entertainment, over 20 health and wellness vendors, blood glucose and BMIscreening, and a Keiki Zone. For more information, go to:  www.diabetes.org/stepouthawaii

The parade honors the accomplishments of Prince Jonah Kūhiō Kalaniana’ole, founder of the Hawaiian Civic Club movement and proponent of the Hawaiian Homestead Act of 1920.  A unique parade, it honors the dedication and commitment of a multitude of individuals and organizations who work year-round to practice and to perpetuate the Hawaiian culture and who enhance the welfare and well-being of the Native Hawaiian community.  Grand marshals are Aaron Mahi, Nola Nahulu and Manu Boyd.  Malihini and kama‘āina, alike, learn about the work of the Royal Societies; the Department of Hawaiian Home Lands; Hawaiian Homestead Associations; the Office of Hawaiian Affairs; Alu Like, Inc.; the Queen Lili‘uokalani Children’s Center, and numerous community organizations, hālau hula, and marching units. Each year members of the Royal Societies (Royal Order of Kamehameha, Ka‘ahumanu Society, Hale O Nā Ali‘i, and Mamakakaua) also participate. Rare Hawaiian flags of the Hawaiian Kingdom are featured.

The Ho‘olaule‘a/Ho‘ike‘ike at Kapi‘olani Park features native Hawaiian arts and crafts, exhibits by various Native Hawaiian organizations and businesses, and wonderful food.  The afternoon is filled with entertainment by Hawaiian musicians.

At7:30 a.m., the Association of Hawaiian Civic Clubs will conduct its lei draping ceremony at the Prince Kūhiō statue at Kūhiō Beach.  After the lei draping, Civic Clubs will join the Royal Family, the Hawaiian Home Lands Trust, Hawaiian Homestead Associations, Royal Societies, and others at Mauna‘ala at 8:30 a.m.  Speakers remember Kūhiō’s life and the impact that he has had on the Native Hawaiian community.  These are free events and open to the public.  For more information, contact Leimomi Khan at [email protected] or phone 372-0630.