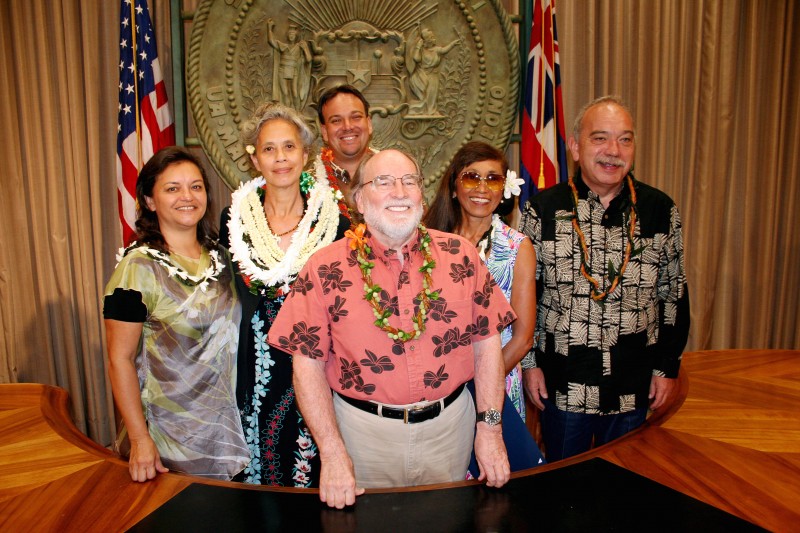 “These individuals represent various sectors of the Hawaiian community. Each brings experience, talent, knowledge, and skills that collectively create a broad-based team,” Governor Abercrombie said. “This team will put together the roll of qualified and interested Native Hawaiians who want to help determine the course of Hawai’i’s indigenous people.”

The Commission will be responsible for preparing and maintaining a roll of qualified Native Hawaiians as defined by the Act. Once its work is completed, the Governor will dissolve the Commission. The roll is to be used as the basis for participation in the organization of a Native Hawaiian governing entity.

“Now is the time to unify as a people,” said At-Large Commissioner Waihe’e. “The belief in our nation building process is being realized. It has been a long time coming but today we have a renewed sense of confidence for our people and our future.”

About the Native Hawaiian Roll Commissioners:

John D. Waihe’e III is the appointed At-Large commissioner. After serving as Lt. Governor under Governor George Ariyoshi, Waihe’e became the first Native Hawaiian Governor and served two terms from 1986 to 1994. His administration created the A-plus after-school-care program, restored more than 16,000 acres of public lands to the Hawaiian Home Lands Trust, and created a committee to help define sovereignty. In 1993, he created the Hawaiian Sovereignty Advisory Commission. Waihe’e, 65, became active in politics after serving as a delegate on the 1978 Hawai’i State Constitutional Convention where he was instrumental in the creation of the Office of Hawaiian Affairs. He earned his undergraduate degree at Andrews University in Michigan and was a member of the first graduating class of the William S. Richardson School of Law at the University of Hawai’i. Waihe’e lives in Honolulu.

Na’alehu Anthony is the appointed O’ahu County commissioner. Anthony is the Chief Executive Director of ‘Oiwi TV and the Principal of Paliku Documentary Films. He is the Director and Executive Producer of ‘Aha’i ‘Olelo Ola, Hawaiian Language news. Anthony has produced and directed a number of films including the award winning PBS Documentary of Mau Piailug: The Wayfinder. Anthony, 36, is a member of the Polynesian Voyaging Society and a captain for interisland and coastal sails. He has documented all the major voyages made by Hokule’a. Anthony holds an MBA and a BA in Hawaiian Studies from UH-Manoa. He is a 1993 graduate of Kamehameha Schools and lives in Kailua.

Lei Kihoi is the appointed Hawai’i County commissioner. Kihoi has served the Native Hawaiian community in various aspects for over 25 years. As a former staff attorney for Judge Walter Heen, she wrote and promoted legislation regarding Hawaiian matters. Kihoi, 66, is a trained counselor in ho’oponopono, mediation and facilitation. She served on a number of boards and organizations including Hui Hanai (Queen Liliuokalani Trust), Polynesian Voyaging Society, and the Native Hawaiian Bar Association. Kihoi, 66, is a graduate of Castle High School. She earned her BS in Education from UH-Manoa, a MSSW from the University of Wisconsin, Madison; and her law degree from the UH Richardson School of Law. A beneficiary of the Queen Lili’uokalani Trust, Kihoi is a resident of Kailua-Kona.

Mahealani Perez-Wendt is the appointed Maui County commissioner. Perez-Wendt was the Executive Director of Native Hawaiian Legal Corporation (NHLC) for 32 years before retiring in December 2009. During her tenure the NHLC litigated landmark cases including Public Access Shoreline Hawai’i v. State, and Waiahole Community Association v. State. Perez-Wendt, 64, was the first Native Hawaiian board member of the Native American Rights Fund. She has been recognized with a number of awards including Outstanding Hawaiian Woman for Community Service, in 1983; Liberty Bell Award from the Hawai’i State Bar Association in 1990; Kalanianaole Award in 2003 from the Association of Hawaiian Civic Clubs; Native Hawaiian Advocate Award in 2009 from the Council for Native Hawaiian Advancement; and Hawai’i Women Lawyers Lifetime Achievement Award in 2009. Perez-Wendt has published poetry and stories in more than a dozen literary journals and anthologies. A graduate of the Kamehameha School for Girls, Perez-Wendt lives in Wailuanui, East Maui.

Robin Puanani Danner is the appointed Kaua’i Commissioner. She is the President and Chief Executive Officer of the Council for Native Hawaiian Advancement (CNHA). Danner has over 20 years of experience working in the field of Native to federal trust responsibilities and government relationships to empower Native peoples. She has extensive management experience in the nonprofit, for-profit business and government sectors. She was the Vice-President and Branch Manager of that National Bank of Alaska and is the former North Slope Borough and Tagiugmiullu Nunamiullu Housing Authority County Housing Director and Indian Housing Authority Executive Director. Danner, 48, founded CNHA in 2001 and developed each of its programs including the first statewide Native Loan Fund, the Hawai’i Family Finance Project, which is certified by the U.S. Housing and Urban Development and funded by the U.S. Treasury to promote financial literacy; the Homestead Self Help Program; and the Hawaiian Way Fund, to advance philanthropy in support of culture, knowledge, and language.

Danner resides on her homestead in Anahola.