Posted on Aug 11, 2011 in Department of Hawaiian Home Lands 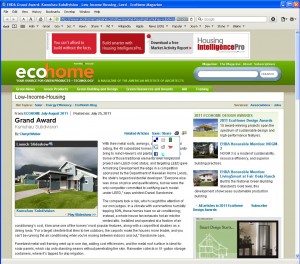 With their metal roofs, awnings, carports, and vertical siding, the 45 subsidized homes in this rural community bring to mind Hawaii’s old plantation-style dwellings. Some of those traditional elements even helped the project earn LEED-Gold status, and targeting LEED gave Armstrong Development the edge in a competition sponsored by the Department of Hawaiian Home Lands, the state’s largest residential developer. “Everyone else was close on price and qualifications, but we were the only competitor committed to certifying each model under LEED,” says architect Daniel Sandomire.

The company took a risk, which caught the attention of our own judges. In a climate with summertime humidity topping 80%, these homes have no air conditioning; instead, a whole-house fan exhausts hot air into the vented attic. Installed and operated at a fraction of air conditioning’s cost, it became one of the homes’ most popular features, along with a carport that doubles as a dining lanai. “For a target clientele that likes to live outdoors, the carports make the houses more livable, and you can’t be running the air conditioning when you’re moving between indoors and out,” Sandomire says.