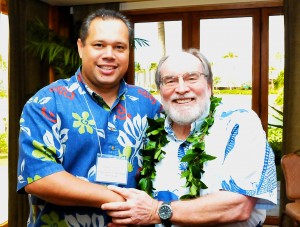 “Broadband is a great equalizer for our Native Hawaiian communities. It is a tool that will allow us to remain in our communities and thrive. We can be safe with reliable access to police and fire protection. Our young people can take college courses without having to move to another island. We can raise our families in our community because we have economic opportunities. We can spread Native Hawaiian language as a ‘living language’ with high-speed connectivity between the schools, between the islands, and beyond. We can access health care specialists via teleconferencing at our doctor’s office,” Chairman Nahale-a said. “We believe ensuring equitable access to broadband is an important step in Congress’s clear intent of advancing the rehabilitation and welfare of native Hawaiians.”

“Historically, Native communities have had less access to telecommunications services than any other segment of the U.S. population. The lack of good, reliable, and affordable telecommunications infrastructure impedes economic development, educational opportunities, language retention and preservation, and access to health care and emergency services,” Sen. Inouye said. “The Native people of our great nation need and deserve the same opportunities and ability to communicate that is already enjoyed by the majority of U.S. Communities. This infrastructure is long overdue and we must work to ensure that our Native communities are fully connected.” Chairman Nahale-a Testimony – April 5, 2011 Page 2

Also testifying before the committee was Geoffrey Blackwell, Chief of the Office of Native Affairs and Policy under the Federal Communications Commission. Chief Blackwell visited Hawai‘i earlier this year to see firsthand the challenges faced by the Department of Hawaiian Home Lands and Native Hawaiian communities in developing telecommunications systems.

“The negative impacts of history fell particularly hard on Tribal and Native Communities,

and aspects of this history resulted in an alarming lack of critical infrastructures. Broadband

opportunities can do much to level this history in bringing health care, education, and jobs to

Native Nations, but it must be available, accessible, and affordable to meet its promise,” Chief Blackwell testified.

Hawaiian communities accelerates our ability to address the social, health, education, and economic challenges we face. With modern technology, imagination, and the broadband infrastructure, Native Hawaiians will be able to excel into the next century and beyond,” said Chair Nahale-a, who testified in support of the FCC’s efforts to expand broadband service in Native communities.

“Access to modern communications is not a luxury. It’s a right. All people, no matter who they are or where they live, deserve access to basic telephone service, wireless service and broadband. Without access to these services, too many of our citizens will be left on the wrong side of the digital divide and denied the kind of job opportunities, educational development, health care options and personal safety that modern communications networks can provide,” Committee Chairman John D. (Jay) Rockefeller IV (D-West Virginia) said.