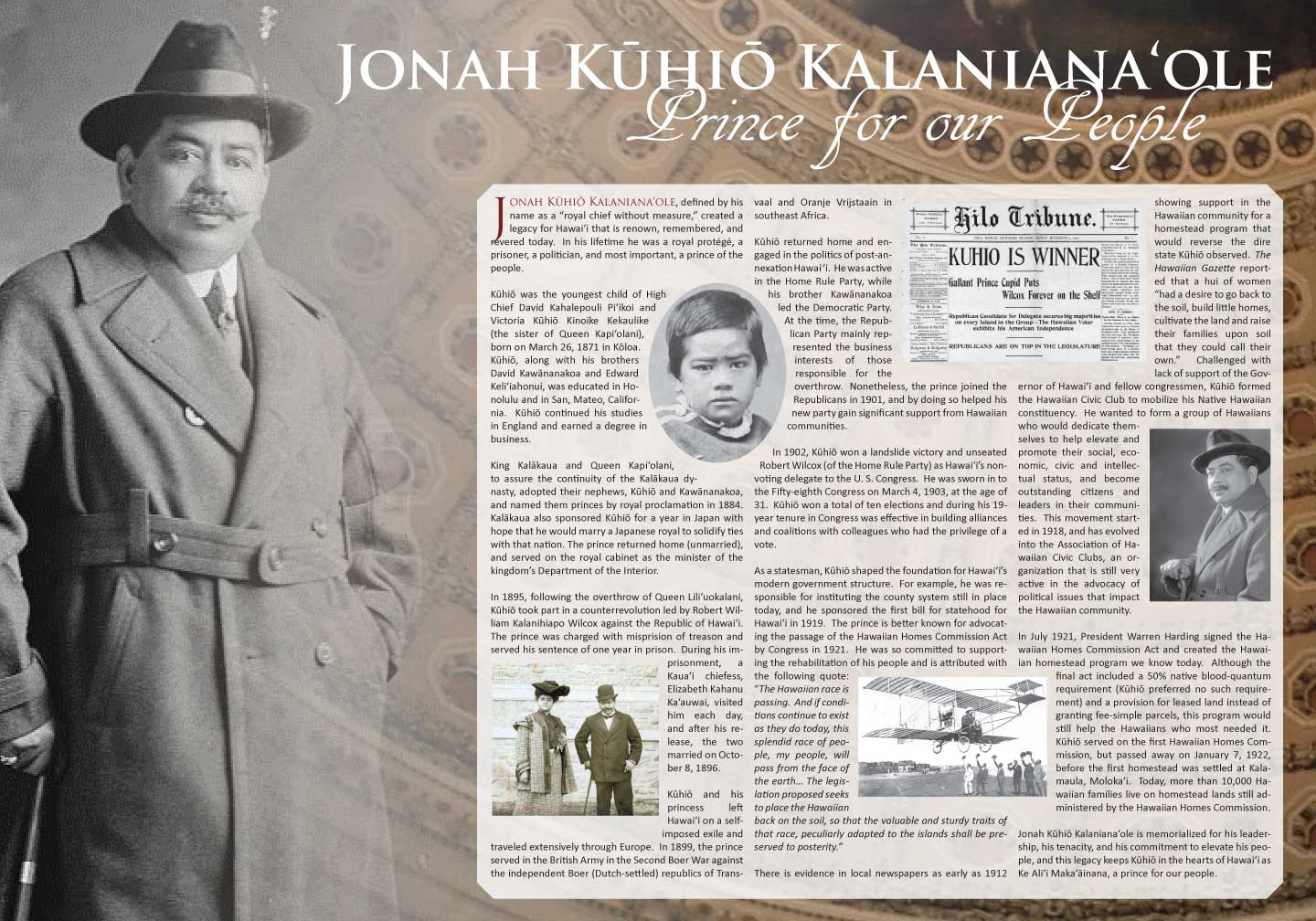 Through its passage, the United States set aside approximately 200,000 acres of land to establish a permanent homeland for native Hawaiians, who were identified as a landless and “dying” people as the result of disease, intermarriage, and loss of lands.

“After extensive investigation and survey on the part of various organizations organized to rehabilitate the Hawaiian race, it was found that the only method in which to rehabilitate the race was to place them back upon the soil,” Kūhiō wrote to U.S. Senators prior to the passage of the Act.

The Hawaiian Homes Commission Act intended to return native Hawaiians to the land while encouraging them to become self-sufficient farmers, ranchers, and homesteaders on leased parcels of reserve land.

Prince Jonah Kūhiō Kalaniana‘ole was born on March 26, 1871 in the Koloa District of Kaua‘i to High Chief David Kahalepouli Pi‘ikoi and Princess Kinoiki Kekaulike, the youngest daughter of Kaumuali‘i, the last King of Kaua‘i. By the age of 13, he was named a Prince by royal proclamation of his Uncle King Kalākaua.

Kūhiō’s early education was in Honolulu at St. Alban’s College, known today as ‘Iolani School, and O‘ahu College, now revered as Punahou School. He was a notable athlete competing in football, rowing, running, and bicycling. Kūhiō was also known as an avid horseman, an excellent marksman and was skilled in the Hawaiian martial art of “Lua.”

Prince Kūhiō spent four years at St. Matthew’s Hall Military College in San Mateo, California, where he and his brothers were the first to introduce the sport of surfing in America. He later studied at the Royal Agricultural College in England and was greeted as an equal in royal courts across Europe. Kūhiō also spent time in Japan as a guest of the Japanese Government, where King Kalākaua hoped he would marry a Japanese royal in  order to solidify Hawaiian Kingdom ties with the nation. He returned to the Islands unmarried and served on the royal cabinet as the minister of the Kingdom’s Department of the Interior.

Following the overthrow of the Hawaiian Kingdom Government in 1893, Prince Kūhiō joined the revolutionaries and attempted to restore the monarchy. The revolution was unsuccessful and Kūhiō was arrested, charged with treason, and imprisoned for a year. He was pardoned when Queen Lili‘uokalani agreed to sign a formal abdication of her throne in exchange for the pardon of her supporters who had led the revolt. Upon his release, Kūhiō married Chiefess Elizabeth Kahanu Ka‘auwai.

Along with his new wife, Kūhiō left the islands on a self-imposed exile, traveling extensively through Europe. The pair traveled to Africa, where Kūhiō hunted big game and took part in the Boer War and on the side of the British.

Under urgent persuasion, Kūhiō returned to his island home in the Fall of 1901 and became the Republican candidate for delegate to Congress. He served as a non-voting delegate from Hawai‘i to the House of Representatives in Congress from 1902 until his death in 1922.

A few of his major accomplishments include a $27 million appropriation for dredging and construction of Pearl Harbor, the establishment of the Makapu‘u Point Lighthouse, building of the Territorial building, the Hilo wharf, the establishing of Hawai‘i Volcanoes National Park, Kilauea National Park, and the building of a hospital at the Kalaupapa Settlement for lepers.

As a statesman, Kūhiō shaped the foundation for Hawai‘i’s modern government structure. He was responsible for instituting the county system still in place today, and he sponsored the first bill for Hawai‘i‘s statehood in 1919.

In an effort to further perpetuate and rehabilitate the Hawaiian people and their culture, Kūhiō helped form the first Hawaiian Civic club in 1918, a movement that now boasts over 50 distinct organizations across Hawai‘i and the United States. He also re-established the Royal Order of Kamehameha I in 1903 and served as Ali‘i ‘Ai Moku until his death.

Hope for the future

Prince Kūhiō passed away on January 7, 1922 at his home in Waikīkī . He is buried at Mauna ‘Ala, the Royal Mausoleum in Nu‘uanu, and was given the last State funeral held in Hawai‘i for an Ali‘i. A few days before his passing, Kūhiō urged a friend to continue fighting for native Hawaiian rights. Noted as some of his final words were “to stick together and try to agree to the best of your ability to meet the most important problem: the rehabilitation of our race.”

Prince Kūhiō Day is a state holiday observed in Hawai‘i on March 26. The day honors the life of Prince Jonah Kūhiō Kalaniana‘ole and his many accomplishments in service of his people and the Hawaiian Islands.

*Congressional Record courtesy of the Library of Congress.

Photos courtesy of the Hawaii State Archives and the Bishop Museum.