Posted on May 11, 2012 in Department of Hawaiian Home Lands, Media Releases

HONOLULU — Governor Neil Abercrombie today announced the appointment of a new Director of the Department of Hawaiian Homelands (DHHL) and a change at the Public Safety Department (PSD).

To begin the implementation phase of the Justice Reinvestment Initiative (JRI), Governor Abercrombie will appoint Ted Sakai as the new Director for Public Safety, effective June 1, 2012. Mr. Sakai held the position during the Cayetano Administration. Jodie Maesaka-Hirata, the current Director, will take on the role of Deputy Director of Corrections, which was left vacant by Joe Booker who moved to the mainland.

“This move came at the suggestion from Jodie who is dedicated to seeing the Justice Reinvestment Initiative implemented,”  said Governor Abercrombie. “Jodie has shown true leadership by having the desire to put the public interest first, and that meant committing herself to the Corrections area of Public Safety where she has a wealth of knowledge and experience. With Ted as Director, I am confident that we will accomplish exactly what Jodie and our team have in mind, which is to bring our inmates who are housed on the mainland back home and to move the JRI program forward.”

For nearly 27 years, Ted Sakai, 65, worked in a variety of executive positions in the State’s corrections system. From 1998 to 2002, he served as the Director of Public Safety. In that position, he provided leadership to the corrections and law enforcement entities. Among other assignments, he also served as Administrator of corrections programs and as the Warden of the Waiawa Correctional Facility, where he tightened security (no escapes for over two years) and expanded treatment programs for inmates. His accomplishments include the implementation of substance abuse and sex offender treatment programs for inmates; development of accountability systems for managers; development of strategic plans for the department; coordination of a multiagency approach for substance abuse treatment; implementing programs to minimize suicides by inmates; and developing policies and programs to reduce abuse of inmates by correctional staff.

Mr. Sakai stated, “I’ve been following what’s taken place regarding the Justice Reinvestment Initiative and I believe it provides a great opportunity to bring positive change to the system. It will take a lot of hard work but it is clear this Administration is committed to seeing it through.”

Ms. Maesaka-Hirata described Ted Sakai as a “mentor.” “Ted is a true public servant and I have witnessed his leadership first hand. With the passage of landmark legislation this past session, I saw an opportunity to focus my attention on Corrections for the betterment of our State’s Criminal Justice System and I am looking forward to serving in this role,” said Ms. Maesaka-Hirata.”Overall our goal is to create a mechanism to return inmates from mainland facilities safely to Hawai’i’s community. This will reduce Hawai’i’s need for contractual Mainland Correctional Facility beds and reinvesting monies within our State.”

The Legislature passed two JRI measures (SB 2776 and HB 2515) that are aimed at making the State’s criminal justice system more efficient and improving accountability. But most importantly, these initiatives increase public safety through evidence-based policy models proven in 14 other states that reduce recidivism and invest savings back into community programs and supervision. 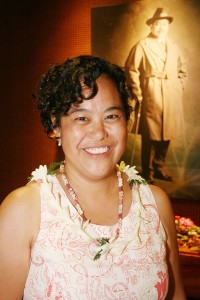 Today, the Governor also named a Director to the Department of Hawaiian Home Lands. Jobie Masagatani will fill the seat being left vacant by Alapaki Nahale-a. Ms. Masagatani previously served as DHHL Deputy Director from 1995 to 2002.

“I am deeply committed to the Native Hawaiian community and am very familiar with DHHL’;s internal operations, funding, unique challenges and ambitious mission,” said Ms. Masagatani. “I am looking forward to working with Deputy Director Michelle Kauhane and the dedicated staff who share a passion for service to Native Hawaiians and all of Hawai’i.”

Ms. Masagatani leaves her position at the Office of Hawaiian Affairs (OHA) where she is Special Assistant to the Chief Executive Officer. Prior to serving at OHA, she was an assistant to the President and CEO of The Queen’s Health Systems where she facilitated development of the strategic plan to address Native Hawaiian health. She also previously served as a Land Investment Analyst for Kamehameha Schools.

Governor Abercrombie stated, “Jobie worked in both the public and private sectors as well as with federal agencies on improving conditions for Native Hawaiians. She understands the challenges and the importance of engaging beneficiaries and is ready to hit the ground running.”

Ms. Masagatani, 47, earned a master’s degree in public affairs/urban and regional planning from Princeton University. She earned a bachelor of science degree in education from Northwestern University. A graduate of Kamehameha Schools, Ms. Masagatani is a resident of Kailua.