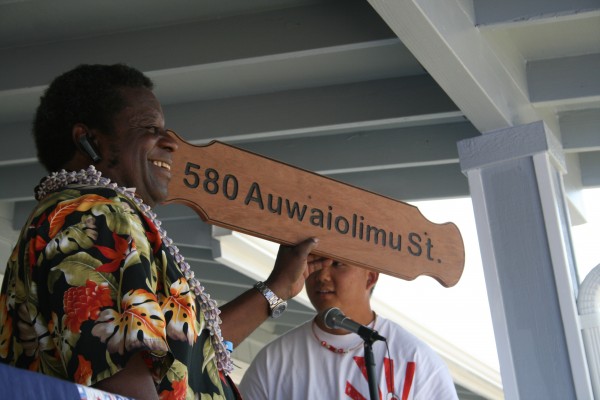 Wallace Naone-Bailey holds up a gift made from the wood of his old house during the blessing of his ʻohana’s new home in Papakōlea this weekend.

PAPAKŌLEA, OʻAHU – Papakōlea homesteaders Frances and Wallace Naone-Bailey can rest assured that their brand-new house will be a place their kids and grandkids always call home.

“Today is ultimately a true celebration of the vision of our Prince Kūhiō,” said Michelle Kaʻuhane, deputy director of the Department of Hawaiian Home Lands, at the dedication ceremony for the Naone-Bailey home in Papakōlea this weekend.

“In thinking of what exactly do you say to this ʻohana on this very special day, all of the things that I thought were more the sights and sounds of what will go on, under this roof for generations to come,” said Deputy Kaʻuhane, “the sounds of little feet running across the living room floor, the clatter of pots and pans in the kitchen, the sibling rivalry that will go on, the laughter, the arguing, the tears, and the joy.”

“A house does not a home make,” said Governor Neil Abercrombie who was also at the dedication ceremony, “When you have a home in Hawaiʻi, you have more than just walls or floors and furniture, you have ‘ohana. There’s a big difference.”

Frances Naone-Bailey inherited this homestead residential lot from her father, along with the original structure, which had become infested with termites and was falling apart. Frances and Wallace sought the help of Honolulu Habitat for Humanity in building a new, affordable home for the Naone-Baileys.

“The Bailey-Naone family thank you all very much,” said Wallace as he was handed the keys to his new home.